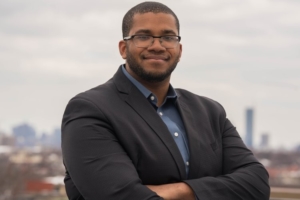 Staff member Kelly Ferguson sat down with Lee to talk about his background in student organizing and juvenile justice and his vision for a more equitable Boston.

Meet Lee
Lee Nave Jr. is a native of St. Louis, Missouri and is the oldest of three children in his family. Growing up, his grandfather helped instill him with the value of public service. His grandfather was a pastor, and had him mow lawns for older, often disabled church members, free of charge.

He completed his undergraduate education in Kansas, and first moved to the east coast to attend Seton Hall University in New Jersey, where he completed Masters Degrees in both Public Administration and Diplomacy, and International Relations. Four years ago, Lee moved to Boston to be with his wife.

In the weeks before starting his graduate program, Lee co-founded Student Voice, a student activism and organizing non-profit. This came about after he first noticed the hashtag #stuvoice (student voice) on Twitter. The Twitter conversation was engaging educators, advocates, government officials and young people. Lee was able to build the online movement into a recognized nonprofit organization which focuses on employing and working with young adults and students. Student Voice continues as an organization to this day, and their efforts are concentrated especially on education access and the Student Bill of Rights. The Student Bill of Rights includes guidelines for universities and colleges such as that school boards at colleges and universities should have at least one student representative.

The Intersection of Juvenile Justice and Mentorship
Nave later transitioned from student advocacy to the juvenile justice space, including in his recent work with Citizens for Juvenile Justice (CFJJ). He came to this work due to having family members who were system-involved. He states that he “didn’t process what it meant” while growing up, but now looks back and can see the disruption that system involvement can have on one’s success and prospects, including one’s ability to graduate high school, pursue higher education, or have a career.

His philosophy in working with system-involved young people is to “find better alternatives to arrest,” and focus on “attacking core issues.” This includes holistic services and diversion opportunities, such as considering the impact of trauma on specific criminalized behaviors of young people, and offering counseling and mental health services to youth rather than solely using punitive measures. As Nave explains, “the sad thing is that oftentimes, youth don’t get support until they’re already in DCF [Department of Children and Families].” Lee’s approach to juvenile justice is preventative work, and he is a strong proponent of mentoring programs. Mentorship is proven to be a highly effective deterrent to high-risk behaviors and court involvement for youth. As Lee states,

“With Silver Lining Mentoring, you fill a void with the lack of adults to help a young person at a vital time in their life—when they are DCF involved. The foster care system is a pipeline to the juvenile justice system. We need young folks to have meaningful adult role models that they can look up to, and who can give them advice and help, rather than having that young person turn to less desirable ways to get information and support. I want every young person in this city to have access to a mentor in some capacity.”

Lee’s proudest accomplishment in his three years with CFJJ is the 2018 passing of the Criminal Justice Reform Bill. As he explains, he and his colleagues worked on “some of the bill components for over a decade.” He goes on to note, “That’s one of the reasons I decided to run for City Council; we need somebody who doesn’t need convincing not to imprison kids for long periods of time, or who needs to be compelled to provide more services to our community.”

Lee Nave on running for office
Nave has chosen to feature affordable housing for Allston-Brighton in his campaign, as between 75%-90% of residents are renters. As he explains, “Our representatives believe that continually building will eventually stabilize the market and lower prices.” Lee’s view on this approach? “We will never reach that point; it’s a pipe-dream.” He has instead proposed “workforce housing,” which refers to affordable housing for those who are employed, and which enables household residents to live proximate to their workplaces. Affordability for renting is generally considered to be 30% or less of one’s household income (for Boston, this was $62,021 in 2018). He also supports the “Flip Tax,” which is a 6% tax on any developments over $2 million.

Given Boston’s history with busing for over 50 years, Lee also spoke about policies for Boston Public Schools in his district. For example, he notes that the Jackson Mann, a K-8 school in his district, is poised to relocate and potentially to close permanently. The relocation or closure also impacts another school that exists within the same site: Horace Mann, which serves differently-abled students. According to Nave, these were “temporary schools built with weak materials, in the 70s,” due to the Boston busing crisis. They were “only supposed to be there for about 10 years, and now have deteriorated to the point where they’re irredeemable. We’re reaping what we sowed because as a city we didn’t plan ahead.” Nave spoke about his support of informed and long-term city planning for school districts, including that of Allston-Brighton.

After over a decade as the City Councilor incumbent, Mark Ciommo decided not to run for a seventh term in 2019. Lee had been planning to run, and this was an opportunity. His current opponents for District 9 include Jonathan Allen, Brandon Bowser, Liz Breadon, Craig Cashman, Daniel Daly, and Amanda Smart. With District 9’s Allston-Brighton containing 65% people under 30, Nave is excited to see record-breaking numbers of City Councilor candidates running.

To learn more about Lee Nave, you can visit his website. Of his campaign, he says: “For me, it’s all about talking to people face-to-face on the issues that truly affect their lives as residents of Allston-Brighton.”

The Council primary is being held on September 24. If you are a United States citizen and a Massachusetts resident who will be 18 on or before Election Day, make sure you are registered to vote! You can visit this site to get information about your polling place, and also how to register to vote or update your registration. Local politics matter, and your vote has real-life consequences on the future of the City of Boston. Make sure your voice is heard by voting in the primary on September 24th of this year.